I recently took a quick trip downtown to the Army and Navy Surplus store on 1st Ave in Seattle.  I was hoping to find some cheap old army blankets to use for various upcoming DIY projects.  I was amazed at how many options they had!  Thin little cot-sized blankets, super thick mostly synthetic "emergency blankets", blue blankets, good ol' army green blankets, black blankets, AND genuine Swiss Army issue blankets!  My original intention was to get something big enough to make a shower curtain out of, which I found, but I couldn't help but get a Swiss Army blanket too!  I've noticed there has been a bit of a fad revolving around the Swiss army insignia lately...I don't know WHY, but I will admit that I am equally drawn to it.

I will be posting projects soon related to how I end up using the big drab blanket, but I couldn't bare the thought of cutting the Swiss one up.  It has now found a home on the back of our futon, where it has somehow managed to transform the old piece of college furniture into something a little more quirky.  It inspired me to rearrange the livingroom.  That, in turn, reminded me that we have still neglected to put up any sort of artwork on the walls.  Must change that.

Posted by Mara Isabel Fields at 11:59 AM No comments:

During my trip to Bellingham,WA, I visited Jinx ArtSpace.  Jinx is an incredible art CoOp where crafters, painters, musicians, and other makers rent individual studios or share the vast basement space.  Jinx has become an integral part of Bellingham's thriving arts and music community, holding monthly all-ages concerts and art shows as part of the city's "First Friday Art Walk".   I spent the afternoon with my old friend Brendan, who showed me the 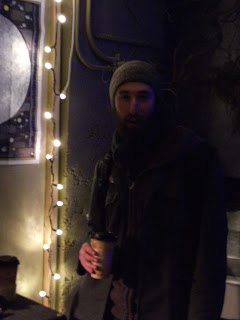 art/practice space he shares with his band mates.

Aptly named, The Womb is a small room hidden in a corridor in the shared basement area, lit atmospherically by string lights and a floor lamp.  Brendan's band "Falling Upstairs" rehearses in the space, which is filled with effects pedals, instruments, show posters, and a few of Brendan's sculptural pieces.

More photos after the jump!  (unfortunently I neglected to bring a decent camera with me, so a re-shoot will probably be necessary before publication.

Having been flung back into freshman-hood as I work on my new degree, I usually try to make whatever BS project I'm assigned worth more than a grade.  Album art assignment? Great, I can use that for my actual album while the youngins make mix CDs.  One of our latest assignments was an in-depth look at a fruit of our choice.  We were told to create a 3D paper sculpture (without using adhesives) which would represent the "relationship of the outside of the fruit to the inside" in an insightful way. 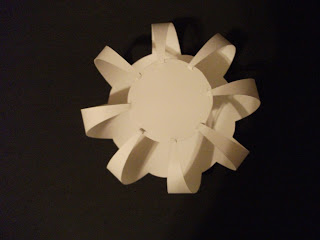 I am not a fan of conceptual art, at least not when I am REQUIRED to make it, but the design I ended up with shows potential.  I'm trying to think now of how I can use this "sculpture" as something else.  Perhaps if I used patterned paper I could turn a bunch of these into a garland?  Or connect them to string lights as little lanterns?  Any ideas? 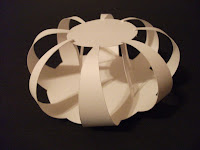 Posted by Mara Isabel Fields at 2:03 PM No comments:

It's midterm week at Cornish College of the Arts, and David is busy running auditions for a short play he wrote (for Ghost Light Theater in Ballard), so there hasn't been much apartment improvement this week. 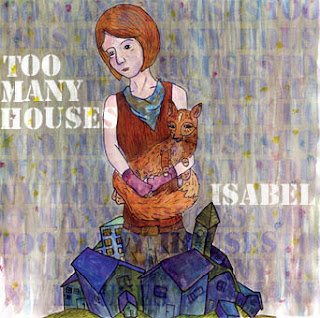 On Sunday I'll be taking a quick little trip to Bellingham to catch up with the folks at Jinx Art Space, who I intend to feature in my book "Maker's Space:Seattle".  I'll be playing at a songwriter slam at the Green Frog Acoustic Tavern (owned by my dear friend James Harnesty) and am scrambling to finish the album art for my solo CD.  Fortunately one of my mid-term assignments is to do just that!  Here's the cover.

Posted by Mara Isabel Fields at 6:27 PM No comments:

Alright, so the chaos of stuff at last is mostly put away.  After months of being separated from my good old desk and piano-bench combo (a Bellingham curbside find which has become my studio standby) my first priority was to set up a workstation in the studio/office room. 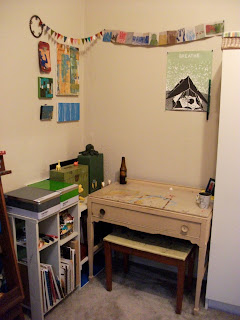 The ways that various people arrange their work space has always fascinated me.  I tend to always set up my space the same way no matter how many times I move: a wall of colorful paintings, posters, and trinkets for inspiration, my funky uneven shelving unit holding an array of art supplies, a magnetic strip to hold my sketches.
Some new additions this time around include Pantone boxes, bike gears, and an up-cycled art "frame" (DIY tip after the jump).
I've been thinking lately about creating a book/photo-essay on the work spaces of various artists, musicians, and crafters in the greater Seattle area.  It's going to be a big project, but the idea of visiting and photographing peoples' studios (particularly in a raw, honest condition)  is really exciting to me.  Toss me an email if you or someone you know would be
interested in participating (izzybell6@gmail.com).  Think of it as free publicity.  I intend to call it "Maker's Space: Seattle" and would like to have it finished by next fall.

Read more »
Posted by Mara Isabel Fields at 11:38 AM No comments:

Having all my art crap out of "storage" again is super exciting....the ridiculous amount of space my boxes of art crap took up was less exciting.  Some shots of the carnage: 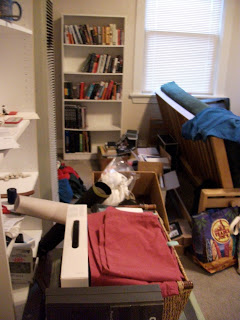 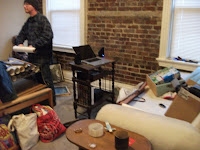 Posted by Mara Isabel Fields at 11:21 AM No comments: 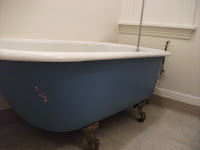 With our rather small budget, we've decided to focus first on our bathroom.  The antique claw-foot bathtub has inspired us to go for a sort of steampunk look.  Our eventual plan is to paint the trim to look like old brass and add some sort of delicate Victorian wallpaper element to the lower section of the walls.  For now we're keeping an eye out for old industrial-looking objects which will later be the detail that ties the theme together.

Our first find comes from the kind of place I generally refer to as a "junk shop"(in a Orwell/1984 reference kind of way).  There are several of these delightfully un-curated stores scattered around Capitol Hill.  Sifting through the shelves and piles of interesting antique objects we found an old (working) army flashlight and some sort of small brass pail whose original use is unknown.  The two objects together cost us less than $10 and had a convincing industrial look once combined.  Toss some tea-lights on the shelves, turn on the flashlight and bam, super nice atmosphere. 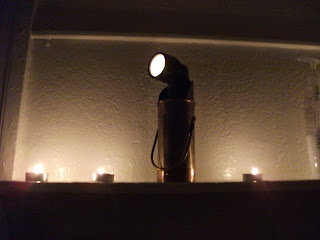 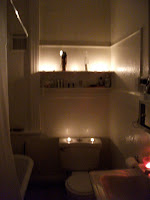 Posted by Mara Isabel Fields at 10:46 AM No comments:

My name is Mara and I'm a maker. I live in a two-bedroom apartment in a Seattle building called "La Villa". David lives here too (he also makes things).

This blog will follow our progress as we Up-Cycle, DIY, and (mildly) art-installation the heck out of this place. Don't be surprised if you also run into some great DIY links, recipes, and art stuff.